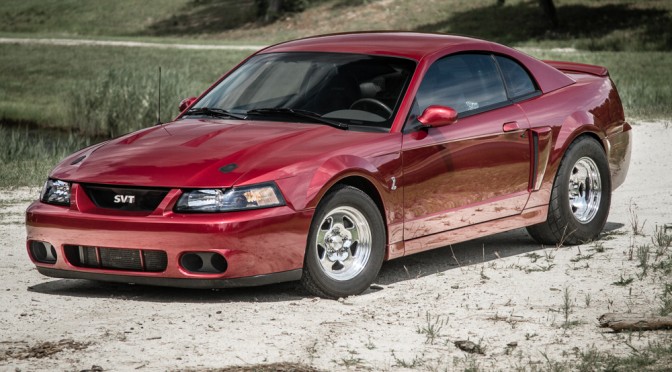 After Ford had struggled with the production issues with the 1999 SVT Cobra, and struggled to keep up with the competition with the 2001 SVT Cobra, they went the proverbial all-in with the 2003 SVT Cobra. Lovably nicknamed the Terminator, it was conceived due to Ford’s desire to terminate any and all discussions surrounding which manufacturer — Ford, GM, or Pontiac — had the fastest pony car, and terminate it did. 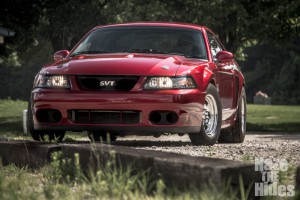 Gone was the previous, naturally aspirated engine, and in its place was a forged engine, with new cam shafts, sporting a Roots-type Eaton supercharger, increasing the power output to 390hp and 390lb.-ft. of torque. At 2000rpm the Terminator produced more torque than its 2001 predecessor did at its peak. It was the most powerful production Mustang Ford had ever unleashed upon the public. 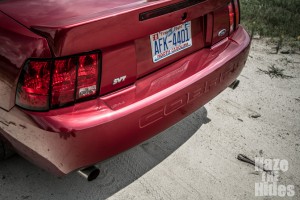 Despite the added weight from the stronger engine and supercharger, resulting in a 54-46 front to back weight distribution, the Terminator handled admirable due to extensive suspension upgrading and tuning. The exterior also received extensive front and rear updates, with a new front fascia allowing increased cooling while emphasizing the SVT Cobra’s wide, bulldog like stance.

This particular 2003 SVT Cobra, named after Will Ferrell’s car in the movie ‘Old School’, is not quite like the rest. Coming near to redefining the word ‘built’, it has been transformed into a very street capable, all-out drag car. No longer in need of carving corners, the independent rear suspension is gone in favor of a much stronger solid rear axle, and an automatic transmission has taken the place of the stock, manual transmission.

In the front, skinny tires keep the weight down while pointing everything straight in the quarter mile. In the rear, massive drag radial tires attempt to make good use of the abnormal amount of torque from the Whipple supercharger sitting on top of the fully built, high compression race engine, which is no longer feeding on regular pump gas, but instead high octane E85, with a power output easily double that of  a stock Terminator. In fact, enough power to make Ford’s otherwise exceptional super car, the 550hp Ford GT, seem like your average family hybrid sedan. This SVT Cobra is a true 9 second car — with 10 second luck. 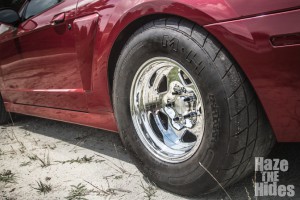 As things are with all purpose built project cars, not much has been left untouched, and every new component has been carefully selected. To call the build list extensive is an understatement so here it is in all its detailed glory.